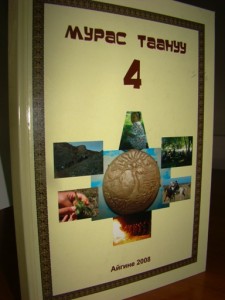 The textbook is based on rich field materials gathered between 2005 and 2008 in Talas and Issyq-Kol Aigine developed a textbook called “Muras Taanuu”. It is intended for the 4th – 8th grades of Kyrgyz secondary school. The main approach to creating the textbook has been place-based, particularly using sacred sites as the basis for education. The textbook was approved by the Ministry of Education of KR and the Academy of Education after approbation in a few schools in Bishkek, Talas and Karakol towns. The first edition was again taken through approbation in two schools of Bishkek and two schools of Talas under the leadership of the Bishkek municipal education administration.

The textbook “Kyrgyz Heritage Study” serves as an additional source to use in teaching of obligatory courses such as “Study of the Motherland” and “Traditional ethics”. The book contains completely new information on the cultural and natural heritage of the Kyrgyz and particularly Talas land. We hope that the topics, as well as the style of delivery and approaches for soliciting feedback will promote ecological awareness and critical thinking. To follow up the educational project Aigine published 1000 copies of the textbook and distributed them to the schools of Talas, Issyk-Kul, Chui oblasts and Bishkek, and sent several copies to Murghab province in the Pamir region of Tajikistan where Kyrgyz people live.