Skip to content
Home
|
Mazar Worship in Kyrgyzstan: Rituals and Practitioners in Talas, 2007 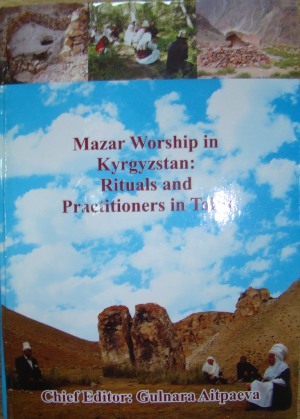 The cultural practice of worshipping at the sacred sites, known as Mazars, is one of the ancient Kyrgyz traditions. Even though the first known date of the worship at these sacred sites is not known precisely, it is several centuries old and has its cultural functions and place in current times as well.

In this book, the Aigine Research Center is publishing its two year research findings of the work conducted in the Talas district of the Kyghyz Republic.

The first part of the book contains information about the experiences of the cultural practitioners acting as traditional healers, dervishes, clairvoyants, kuuchus (q.v.) and those who recite the Manas epic. Also included are the voices and experiences of the shaiykhs who have a personal and spiritual relationship to the sacred site, who accepted a duty of a guardianship of sacred sites as their life mission and who revere the sacred sites.  Also included are the words of the visitors who come to visit sacred sites from far distances.

The second part of the book contains the thoughts and opinions of scholars who wrote about the sacred sites. The professional and educational backgrounds of these scholars are varied and diverse. They include, but are not limited to, students, historians, medical workers, psychologists, philologists, physicians, biologists, anthropologists and most importantly, people who worship at sacred sites.

The book is available in Kyrgyz and English languages.