An ensemble of a thousand Komuz players performed ‘Mash Botoy’ melody of the Kyrgyz composer Atay Ogombaev. The performance was presented at the opening ceremony of the second World Nomad Games on 3rd September 2016, which was held at a new hippodrome that qualified international standards. The ensemble was organized by Aigine Cultural Research Center  with help of 48 coordinators from all the quarters of Kyrgyzstan and who are the Komuz players themselves.

The formation has started from a visit of  opening organizers to Aigine’s office in the middle of June 2016. They  came with the idea to organize this performance. Before that organizers had unsuccessfully contacted the Kyrgyz Ministry of Culture and a few other organizations in Bishkek with the same idea. Aigine invited 12 Komuz players from all over Kyrgyzstan to discuss an option of forming an ensemble of a thousand Komuz players in an extremely short – just two months – time span under rather unfavourable conditions. Those 12 musicians were participants of Aigine’s previous projects on promoting “En Belgi”, the original technique for learning playing Komuz developed by the outstanding Kyrgyz musician Nurak Abdyrakhmanov. As result of these Aigine’s projects with support of the Christensen Fund 40 music teachers from various parts of the republic were trained in En Belgi teaching technique during 2010-2012. They have become the core in bringing together and coordinating the thousands Komuz players’ ensemble. Nurak Abdyrkhmanov dreamed of a simultaneous performance of 500 his apprentices. Namely making a reality of this particular dream of the great Master became the main moving reason for Aigine together with hundreds of Nurak’s apprentices to start the formation of the thousands ensemble. In the memory of the great teacher and musician the ensemble was named after his original teaching system “En Belgi”. Each of the 48 coordinators, the majority of whom were the graduates of Aigine’s projects on “En Belgi”, had been preparing groups in their regions. On 1st and 2nd September, the two days before the main performance, despite of unfortunate weather and poor-organized logistical conditions our musician coordinators were able to keep up the mood of the ensemble’s members the majority of whom were young people under 16. One of the intentions was to perform not just at technically high level but also fascinate listeners with a magic of a Komuz sounds and transmit an exciting power of “Mash Botoy” composition. This performance promised to became a musical and spiritual action. During preparation time Komuz players offered prayers to the memory of Komuz musicians who greatly contributed to the gold fund of the Kyrgyz folk music. The ensemble carried out a ritual of collective prayer and blessing (tilek kyluu) at the edge of the opening ceremony. Probably, all those arrangements made possible the collective emotional amusement for most of listeners from the “En Belgi” final performance that ancient Greeks called catharsis and Kyrgyz called aruulanuu. The thousands Komuz players ensemble “En Belgi” is a visible model of consistency of Aigine’s projects supported by the Christensen Fund. During past years practically all the graduates of these projects have been keeping in touch with Aigine. They also took parts in various events of Aigine organized in the capital and regions. And what is most important, they have created a wide network of Komuz players and apprentices that was mobilized during two months to build the main body of the “En Belgi” ensemble. 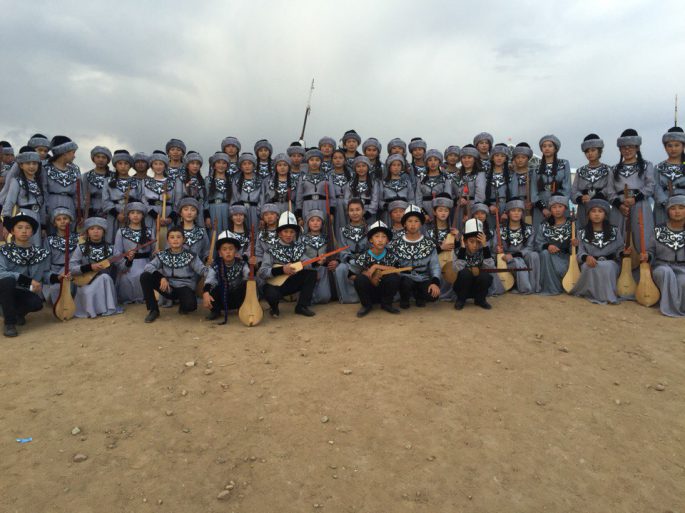