The highlight, main result and achievement of the two-year seminar was a performance of 65 peopleat the society building of the National Philharmonic Hall in Bishkek on December 22, 2012. The Aigine CRC organized and conducted the concert as a presentation of the seminar’s result, which, at the same time, was dedicated to lifetime work of N. Abdrakhmanov and consisted of melodies and songs composed and written by the master. The concert was a perfect indicator of the project’s sustainability. The Aigine CRC fulfilled its objective and initial plan to train and gather more than 50 komuz players at one stage performing traditional melodies learned by means of the En Belgi system. Participants of both seminars, each came with 2-3 students, who learned komuz with En Belgi. The age range of the students was diverse, from elementary to university students. It was difficult not to observe the excitement, joy and motivation of students during the rehearsals; it was also quite pleasant to observe how N. Abdrakhmanov was radiating with joy while working with teachers and their students. Thus, we witnessed the “birth” of young generation of komuz players,revitalization of traditional mentorship system and transmission of traditional music from one generation to another. The Aigine CRC is strongly motivated to accumulate financial resources and, in the near future, organize series of concerts in the regions with the En Belgi ensemble. We hold a strong belief that these people, independently, with different group compositions, will continue their performances on different occasions.

It was a powerful scene, giving goose bumps to anyone listening, when the ensemble of 65 komuz players were performing at the same time. The strength, profoundness and the beauty of the sound of komuz was astonishing. Performance of outstanding komuz players of our time, prominent manaschys, talented contemporary celebrities and gifted young dancers – breathed beam of strong light and freshness and brought joy to people’s heart on these gloomy winter days, especially right after the Mayan prophetic “dooms day”. If we are to calculate all the expenses, then organization of such a large-scale event will cost around 10,000 USD (470,000 KGS); however, the Aigine CRC was able to minimize this cost to 4,400 USD (207,000 KGS). It was achieved not due to large financial contribution of some sponsors, but thanks to: a) participants and their students, who took care of their accommodation and partial meals, b) celebrated singers for performing free of charge, c) National Philharmonic Hall for minimizing the cost of the rent, d) Ministry of Culture for negotiating with the Philharmony, e) National TV Channels for broadcasting announcement free of charge, f) fellow tribesmen of N. Abdrakhmanov for mobilization. We also would like to emphasize significant financial contribution of the Parliamentarian, K.Samakov. The concert wouldn’t have such scale and success if not the help and contribution of the abovementioned parties.

The importance of the En Belgi system in revitalizing, preserving and developing the traditional music has been emphasized number of times by musicians, teachers, practitioners and researchers. In roder to further enhance and develop the efficiency of En Beli and the book, participants suggested considering the following changes to the book:

– to indicate, if possible, each hand playing technique with a special sign or symbol;

– to include special signs for slow and speedy playing;

– to include more theory and theoretical information for those without music education, because the book is easy to perceive and use for musicians; however, somewhat difficult for amateurs.

Participants also expressed their opinion that development and issuance of books on En Belgi system separately for high school and music school students would be a very unique and important teaching aid.

The Aigine CRC feels grateful to N. Abdrakhmanov who has spent more than 36 years of his life searching for and developing this unique system – an embodiment of tradition and innovation. He used traditional teaching methodology of his forefathers, thus preserving the authentic reproduction of sounds, and integrating it with contemporary music concepts by further developing and adjusting the playing techniques to the needs and understanding of the modern society.

Based on the results of our four-year experience, we can state with certainty that the initiative of publishing a book on the En Belgi system and mentoring teachers through series of teaching seminars became a successful project, in terms of sustainability, self-organization of teachers and subsequent evolution of the system and, as a result, prosperity of traditional music culture.

As tangible results of our activities, we have:

– Self-organized and growing network of bearers of the En Belgi system and traditional teaching methodology (to be exact, 26 teachers throughout the country with each having approximately ten students);

– En Belgi Group ensemble of seminar participants with ready and growing repertoire for regular performances (concerts of traditional music at Marko Polo and during the visit of Kyrgyz minority group in Tajikistan (2011); at the International Symposium (2012), during the visit of TCF’s Board members (2012), presentation of the video version of the Manas epic, (2012));

– Successful concert with participation of 2011-2012 seminar participants together with their students (65 people) at the Society Hall of the Kyrgyz  National Philharmonic Hall and celebration of N. Abdrakhmanov’s 65-year anniversary and official presentation and debut of the seminar participants.

– Launch of the regular komuz course for all the interested parties mentored by Cholpon Alymbekova, adjunct instructor to N.Abdrakhmanov starting from January 2012;

–  Stepping on to the academic terrain – Abdubaliev B., komuz instructor from the OshSU’s [1] music department chose to work on Traditional Motives in N.Abdrakhmanov’s Work during his PhD. Starting from January 2012 he will have 10 days internship at the Aigine CRC to start his initial research. Second participant, Jakypov K., komuz instructor from the NTTU named after I. Arabaev, together with N.Abdrakhmanov and Aigine CRC will prepare a manual on komuz playing based on En Belgi system for middle and high school students by the end of 2013. 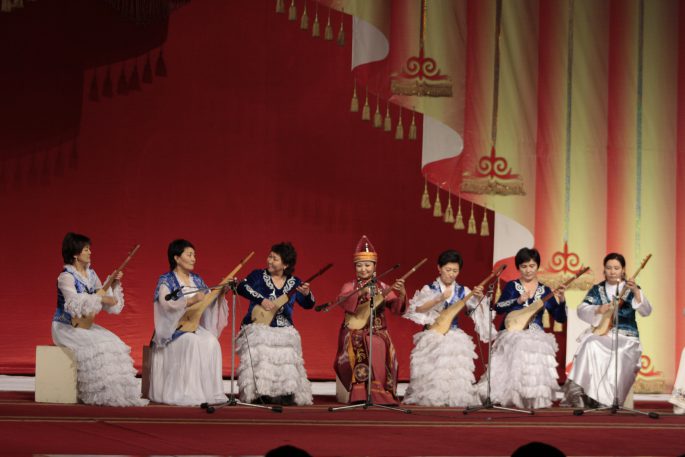