Skip to content
Home
|
The first year of training seminars

The summer session (July 1-12, Issyk-Kul) was held on the shore of Lake Issyk-Kul and mountains of Karakol with a field trip to sacred site Jeti-Oguz. The essence of Kyrgyz traditional music is about the beauty of nature, pure running water, abundance of plants and animals, the harmony and oneness of a human being with nature. The whole course of the summer session went in a positive atmosphere surrounded by the magnificent beauty of the mountains, trees, innumerable wild flowers and the fresh air filled with natural aroma and scent. Both, komuz players and Manas reciters received energy and spiritual elevation to master and play their melodies and epic recitation. Aigine CRC learned that well-organized and balanced combination of theoretical and spiritual component, entertainment, sightseeing, rest and work is a key to an efficient model of conducting a session and transmitting knowledge and imbibing new information. The program of the summer session was also more focused on group work and individual training. Participants were divided into, and worked in small groups, with later collective rehearsals, which proved to be efficacious and expedient way, since participants worked with more concentration and attention in smaller groups.

One of the conditions of the teaching seminar was to train certain  number of students to play komuz with the En Belgi system in between the spring and summer sessions, and almost all the participants successfully fulfilled this condition by forming and giving private lessons to a group of 10-13 students.

Relatively high turnout of interested students in such a short period of time couldn’t not excite and encourage participants, as the number of students is in direct proportion to the size of financial benefit. Being able to be financially rewarded for one’s work, especially when it comes to teaching, becomes one of the driving forces to carry on with their profession. It is a perfect combination when favorite professional activity brings satisfactory financial reward, which in turn gives more incentives and motivation to a person to excel in their activity. Therefore, both, professional growth and financial benefits became one of the strong motivating factors for participants to fully master the En Belgi system and traditional folk melodies. However, not everything went so smooth and easy. One of the main difficulties of the summer session was learning conventional sings which indicate special hand play techniques and different sound level. There were cases, when N. Abdrakhmanov and Ch. Alymbekova spent long hours working individually with each participant on one particular hand play technique; sometimes they would stay up until midnight learning a new melody. It was evident how much effort, will, perseverance, patience and hard work each participant put in mastering new melodies. As one of the participants, Jakypov K., said: “You’ve treated us as kings, but made us work as slaves”, which perfectly described the course of the summer session.

The concluding fall session (November 19-25) was held in Bishkek and during this short time participants learned 7 most advanced and difficult melodies (att.6: teaching seminar on En Belgi – program and report of the fall session). Other 17 melodies learned during the two previous sessions were fully mastered and perfected. Participants became proficient in reading music on En Belgi; they also mastered all the hand play techniques and conventional sings. Participants integrated the En Belgi system into their school teaching curriculum and now teach komuz though private lessons and within the official school curriculum. Integration of traditional teaching methodology, in this case En Belgi, into the state education system was one of the Aigine CRC’s long-term goals, which has already started implementing itself. By the end of the fall session, we had 16 qualified and proficient instructors of the En Belgi note system. After passing an official examination on all the learned melodies and fulfilling all the requirements spelled out in the agreement, participants were awarded with a certificate acknowledging their ability and proficiency to teach komuzplaying based on En Belgi system. This group became the first network of music teachers, as well asbearers of traditional music throughout the country qualified to teach, preserve, promote and transmit traditional folk melodies and teaching methodology.

Teaching was carried out in a very positive and constructive atmosphere; there was no division and separation into “teacher” and “student” or “strong” and “weak”. Everybody worked together to reach one goal by helping, learning from and teaching each other; the knowledge was being transmitted through live action and interaction. There was a strong sense of unity, team work and spiritual upliftedness. Apart from learning En Belgi, participants also had a chance to immerse themselves in the mysterious world of sacred sites through documentary movies produced by the Aigine CRC with support of The Christensen Fund; become captivated by and indulge in Manas chanting; be fascinated by stories about healing capacities of komuz melodies passed from one generation to another; bask in the summer sun and plunge into the crystal-clear blue waters of Lake Issyk-Kul. N. Abdrakhmanov, having raised several generations of successful apprentices shared his experience, skills and knowledge on how to build strong and efficient master and apprentice relationship, which was essential and practical information for the participants.

As tangible results of the project’s first year, we can consider the following:

–        Formation of a strong ensemble of 16 people (who named itself as “Aigine group”) with a ready repertoire of songs and melodies ready for performance;

–        Conduct of two public concerts, at the Marko Polo Resort and during the meeting with representatives of Kyrgyz people living in Murghab, Tajikistan.

–        Stepping on to the academic terrain – Abdubaliev B., komuz instructor from the OshSU’s music department chose to work on Traditional Motives in N.Abdrakhmanov’s Work during his PhD. He will have 10 days internship at the Aigine CRC to start his initial research. Second participant, Jakypov K., komuz instructor from the NTTU named after I. Arabaev, together with N. Abdrakhmanov and Aigine CRC will prepare a manual on komuz playing based on En Belgi system for middle and high school students by the end of;

–        Alymbekova Ch., informal leader of the group and N. Abdrakhmanov’s assistant, started giving komuz lessons to the Aigine CRC’s staff members, and from January 2012, on a regular basis, will start giving lessons to music teachers from Bishkek and all those willing to learn how to play komuz;

Of course, the first year of the seminar presented certain problems in many ways, from the selection process to the development of seminar program. The group of the first year was very diverse, some were professional musicians and some were just lovers without a musical background. As a result, this group worked more in groups and they created a great team spirit. During the seminar, the participants formed an ensemble under the self-proclaimed name En Belgi group with a ready-made repertoire for performances. The strength of this group was in the ability of each participant to absorb and deeply penetrate the spiritual and traditional mentoring system to follow the example of their mentor, Nurak Abdrakhmanov. Towards the end of the seminar, they all started using En Belgi as part of their school curriculum, as well as conducting komuz lessons as an additional curriculum for all interested people. 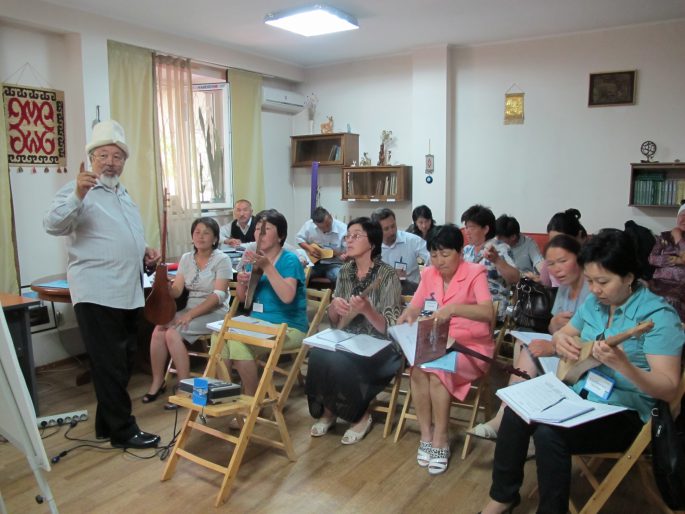 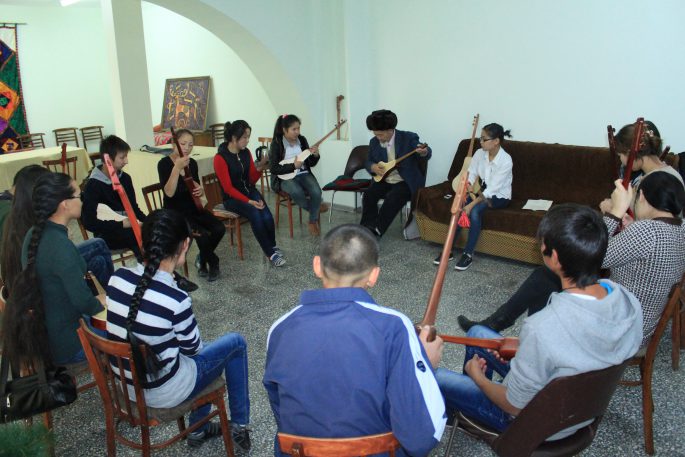