Selection of participants was conducted in two rounds, i.e. application submission followed by an interview. Main selection criteria included a) completion of a higher music institution; b) familiarity with komuz; c) teaching experience at a state institution; d) letter of support from workplace; e) availability to participate in all the three seminar sessions; f) interest in traditional knowledge. One of our strategic goals was to recruit participants from remote areas, especially from the southern oblasts, as there is a big information gap, as well as lack of financial and human resources. However, as it was expected, we faced certain difficulties and challenges in reaching out to those areas. The absence of communication means at schools and weak network of regional education departments, made it difficult to disseminate the information. Therefore, network of our regional practitioners and collaborators played an important role in our publicity campaign. Certainly, applicants from Bishkek outnumbered those from the regions, which became one of the other challenges to deal with. However, with some effort and networking, we were able to recruit 15 teachers from remote villages of Osh, Jalal-Abad, Batken, Talas, Naryn and Issyk-Kul oblasts. We have selected only one applicant from Bishkek, instructor of komuz at the NTTU named after I. Arabaev. Cholpon Alymbekova, deputy-head of the #5 Bishkek children’s music school and N. Abdrakhmanov’s one of the eldest apprentices became the self-financed 16th participant of the spring session. However, her profound knowledge of komuz and strong interest in mastering and promoting En Belgi, but most importantly, her assistance to N. Abdrakhmanov by explaining some details and conducting individual work with each participant, made us invite her as a full-fledged participant under a condition of becoming an adjunct instructor. 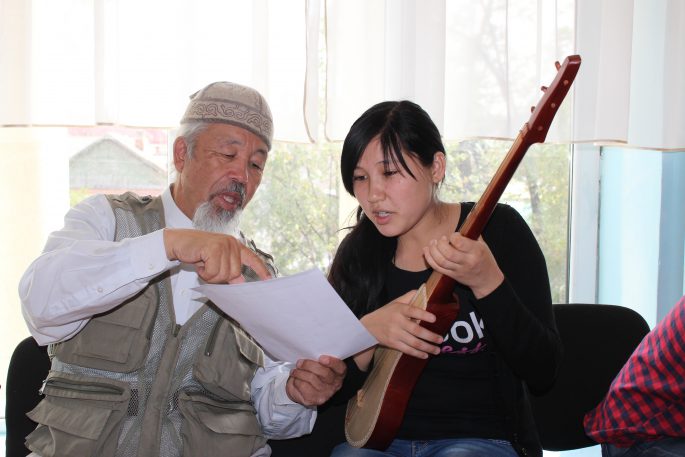