The project team together with the coordinators of the on-site working groups planned, organized and conducted a 3-day on-site capacity building workshops for concerned community members – sacred site guardians, practitioners, pilgrims and other interested stakeholders from 6 June to 6 October, 2019. In each province, the regional coordinators were in charge of setting the workshop dates, selecting a place and venue, identifying participants from the concerned community and choosing sacred sites for group pilgrimages. There were from 11 to 14 participants who took part in these workshops. In total, there were 89 participants in 7 regions.

At the beginning of Stage II, the project team identified and invited 3 national experts on ICH to be involved in on-site capacity workshops as facilitators. These experts have been working with Aigine CRC for over 10 years on number of projects and have been representing Kyrgyzstan in various ICH related conferences and workshops. Their work has encompassed different aspects of ICH, from historical, philosophical and community perspectives. Therefore, their knowledge and expertise were invaluable in delivering the workshops and working with the communities and stakeholders. 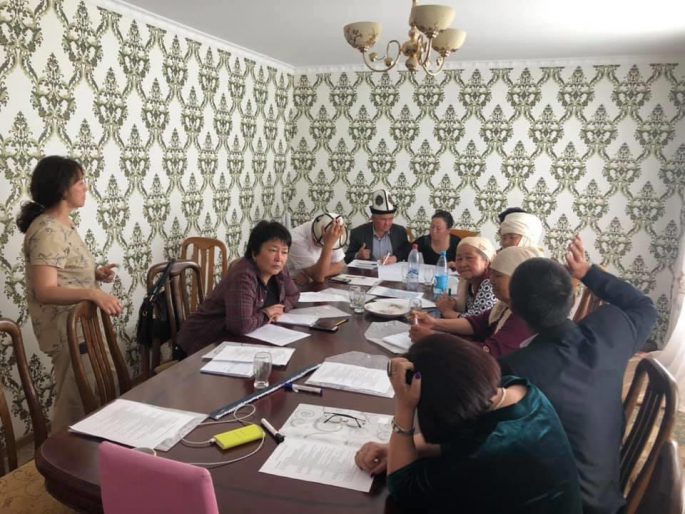 The 1st day of the workshop was devoted to introduction and overview of the 2003 Convention. The following main concepts – ICH, communities and their role, safeguarding principles and ensuring ICH viability – were discussed and analyzed. The full text of the Convention in Kyrgyz language provided by the National Commission of the Kyrgyz Republic for UNESCO was distributed among all the participants.

The 3rd day of the workshop was a working meeting with the regional coordinator, working groups and participants on crosschecking, data verification and selection of sacred sites and ritual practices from each province to be included in the Inventory. There were some sites and rituals that no longer exist/practiced, they have been removed from the list, while some new sites and rituals have been added. The first draft of the inventory has been prepared upon completion of all the workshops.

One of the members of the Steering Committee, sacred site guardian, Jenish Kudakeev, passed away in the summer of 2019. During the workshop in Talas, the project team and the community members organized a group lunch dedicated to his memory with participation of his family members, his wife and son, who became the guardians of Nyldy-Ata sacred site in Talas after him. 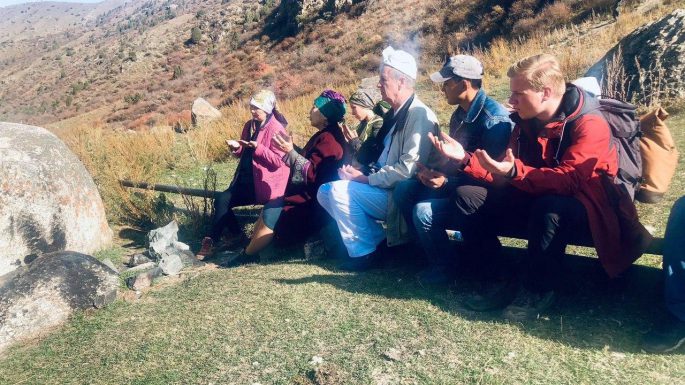 At the initiative of the community members and stakeholders, within the course of the workshop, the project team together with the experts and participants made several trips to sacred sites. The main idea was to practically demonstrate to participants how identification, documentation and inventorying of ICH is carried out. Participants were able to be both, the interviewers and interviewees. They took part in photo and video documentation and collection. They were able to witness the whole complex of ICH inventorying. 3. The project team analysed the workshop data and prepared the first drafts of the inventory and the manual upon completion of all the workshops.