Secrets of petroglyphs live on TV

On December 22, the leading expert of the project “Study and preservation of traditional knowledge related to the petroglyphs of Ak-Bulun (Ysyk-Kul province, Kyrgyzstan)” archaeologist Oroz Soltobaev, his student (Faculty of History of KSU) Nurzhigit Beishenkulov, together with the director of Aigine CRC Gulnara Aitpaeva, took part in live program Madaniyat maidan (Cultural platform). The program was hosted by Mirkhamid Toktogulov.

Director of Aigine CRC spoke about the initiation of research in Ak-Bulun by manaschy Tilek Asanov. It was his insistent invitations to study the stone carvings on the slopes of the Ak-Bulun hills that initiated this project and led to the discovery of a previously unknown complex of petroglyphs.

Guests of the program presented the concept of the project, which is based on four key components: a) a combination of academic and traditional methods of studying petroglyphs, b) involving students from capital and regional universities in a petroglyph research project, c) involving local residents in the processes of safeguarding local cultural heritage, d) interaction with relevant state structures.

The steps for the implementation of each of the components were thoroughly during the broadcast. Withing the framework of the project, a regular platform has been created for the exchange of opinions of archaeologists and traditional practitioners. Students of KNU and ISU named after K. Tynystanov took a short theoretical and practical training based on Ak-Bulun petroglyphs. Interaction with local structures of Ak-Bulun has been built. Chynarbek Zholdoshev, Ministry of Culture officer in charge of the tangible cultural heritage sector, is involved in the project as a consultant.

Archaeologist Oroz Soltobaev emphasized the nature of the Ak-Bulun complex by highlighting the stone carvings as well as stone sculptures (baba tashtar) as well as the ritual sites. The archaeologist also gave a description of stone carving’s main themes and expressed an opinion on the time frame for the creation of the complex, and shared his assumptions about the reasons for the creation of petroglyphs. Oroz Soltobaev, who teaches at KNU, emphasized the need to train students and residents in basic methods of identifying and protecting cultural heritage.

Student Nurzhigit Beishenkulov shared his experience of participating in the certification of petroglyphs and the stamping of Ak-Bulun stone sculptures. As the main problem for the protection of the heritage of petroglyphs, Nurzhigit identified the ignorance and indifference of local residents to the cultural phenomena that are close to their settlements.

In conclusion, the host of the program Mirkhamid Toktogulov asked about the possibility of developing a creative economy based on local complexes like Ak-Bulun, for example, creating a tourist visiting zone.

Shortly before the program, Aigine CRC held consultations and analysis with all experts and representatives of Ak-Bulun village administration for the joint preparation of an information sign and stand, as well as an online map of the complex. All this products will be transferred to local authorities and can serve as the basis for the development of tourism. 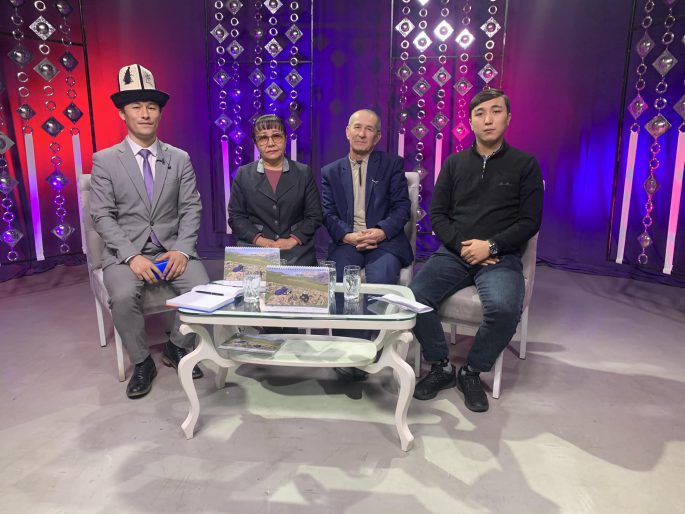