Closing ceremony of 16 days of activism against gender-based violence

The closing concept was developed by the Aigine CRC team together with partners and UN Women in the Kyrgyz Republic. So, the main topic of the closing was the message – “every girl has the right to realize her creative potential, including the conditionally” male “professions.” The concept is based on the belief that cultural codes and values ​​must be used to effectively counter domestic and gender-based violence. In this case, wide groups of people, and not only gender activists and international foundations, can be involved in the awareness of forms of violence and counteraction to them.

The ceremony was opened by the Minister of Culture, Information, Sports and Youth Policy – Zhamankulov Azamat Kaparovich.

As part of the event, a video reflection was shown, created by the Aigine CRC team with the participation of the manaschy Dөөlөt Sydykov and the director Yrys Okenova (wife of Dөөlot Sydykov). The video reflection is dedicated to the story of women manaschys and the right of women to realize any talent. Dөөlөt Sydykov  tells about the history and difficulties of the life of the outstanding woman manaschy Seidene Moldoke kyzy (Seidene semeteichi). The video also raised questions about the role of women in society, from a historical and contemporary perspective, and about prohibition as a form of violence against women.

The ceremony was closed by the Minister of Labor, Social Security and Migration – Bazarbayev Kudaibergen and the head of UN-Women in Kyrgyzstan Ulziyisuren Zhamsran.

The event is organized as part of the Ray of Light, a global initiative to end gender-based violence, launched by the European Union (EU) and the United Nations (UN). 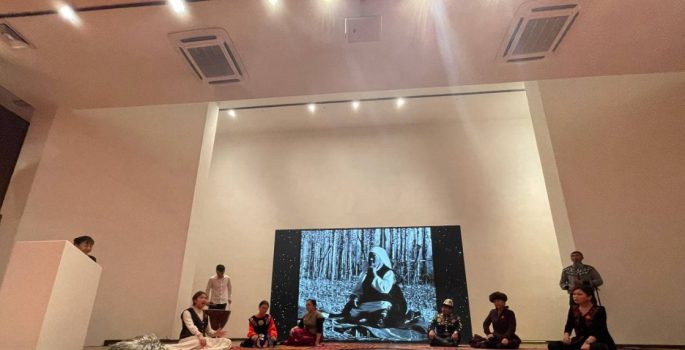