From 13 to 15 April 2021, the Aigine CRC team, alongside traditional knowledge bearers and practitioners from Issyk-Kul, Bishkek and Talas, made their first field trip to the petroglyph site in the village of Ak-Bulun, Ak-Suu district, Issyk-Kul province. This field visit was dedicated to studying petroglyphs by means of receiving ayans, or spiritual visions and messages within the project “Ayans, their Interpretations and Social Power” supported by the Worldwide Indigenous Science Network.

Upon their arrival at the site, the practitioners carried out the jyt chygaruu ritual, or making sacrificial round pieces of bread as a sign of greeting, worshipping and obtaining a blessing from the site’s guardian spirits. While studying the petroglyphs, each practitioner was conducting individual practices and immersing themselves in meditation to tap into the knowledge and information about the petroglyphs in that area. As a final unifying ritual, the practitioners performed uluu ot, or the fire ceremony.

As observed by the practitioners and the Aigine CRC team, the Ak-Bulun petroglyphs are very ancient. This is a judgement that can be made by looking at multi-layer surfaces of the boulders with petroglyphs. Scattered throughout a vast area, these boulders have various drawings engraved on them, starting from hunting scenes to celestial maps. According to some visions of the practitioners, one of the petroglyphs depicts the creation of the world.

The Aigine CRC is saddened to report that almost all petroglyphs are in a very bad condition, with many of them becoming erased or disappearing whatsoever, while the majority of local dwellers are unaware about the existence of this site. 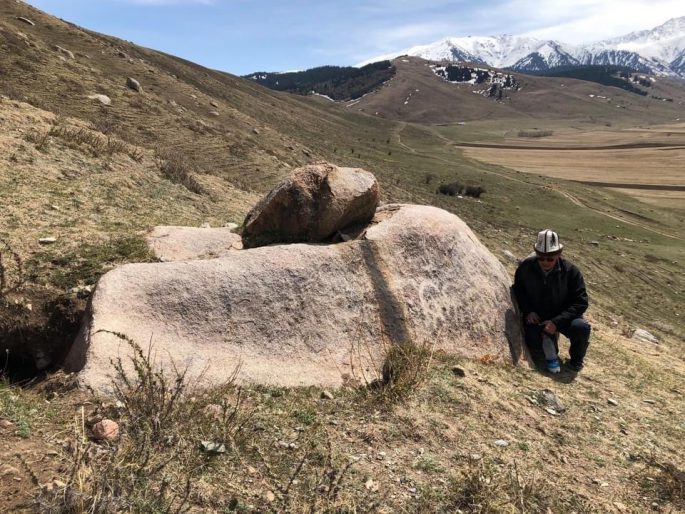