Skip to content
Home
|
A new project on “Ayans, their interpretations and social power”
Blog

A new project on "Ayans, their interpretations and social power"

Aigine CRC is preparing to start a new project on “Ayans, their interpretations and social power” supported by Worldwide Indigeneous Science Network (WISN).

One of the most significant types of dreams in Kyrgyz culture is a prophetic dream – ayan – that can be manifested both, in the state of consciousness and in the state of sleep. In the former state, visions appear as in real life and the message is apparent, while in the latter state, the dream might be of a repetitive nature. Ayans per se are revered as powerful tools of conveying meaningful messages and believed to have social power. Traditionally, ayans are received in times of turmoil and hardship in personal and social life and are intended to provide a vision to alleviate the situation.

Ayans, as signs and visions can be received anywhere depending on the situation. However, there is a notion that ayans at sacred sites are frequent and more comprehensive, because sacred sites, especially sacred petroglyphs, are portals into other dimensions. The Kyrgyz believe that our ancestors have coded laws of life and the world around us into the ancient petroglyphs as signs.

The project’s objectives are: a) to decode the messages at sacred petroglyphs through receiving visions/ayans; and b) to verify and conceptualize the received messages at participatory seminars. The goal is to search for possible ways to utilize these messages/ayans for building more peaceful and open-minded Kyrgyz society. 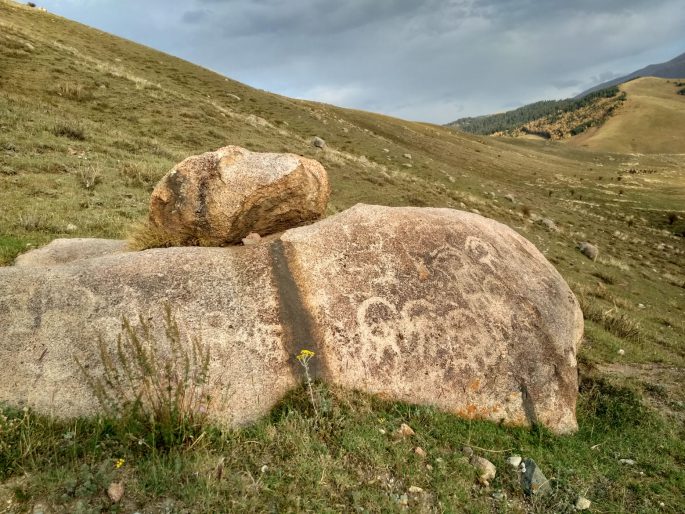