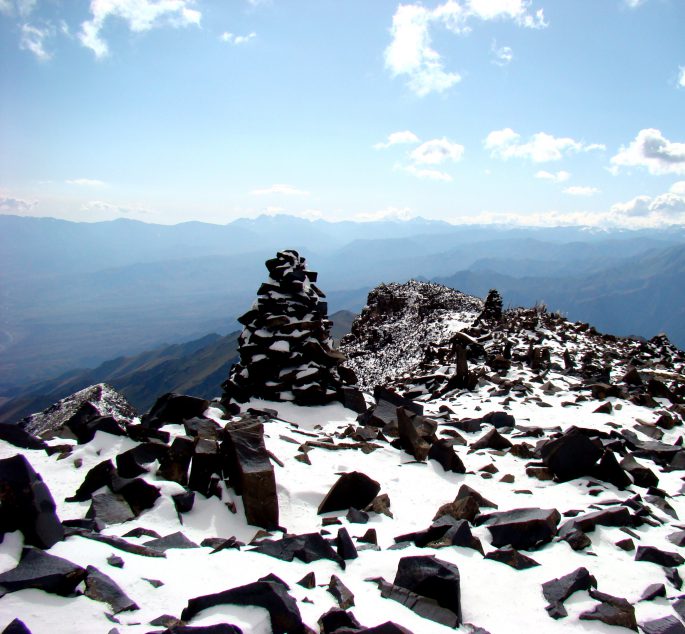 Toguz-Toro is an area surrounded by nine mountain ranges and is located in Jalalabad province. Jylangach-Bugu is located in Toguz-Toro region, to the north of Kazarman village on the summit of the highest peak of the Moldo-Too Mountain range. The altitude of the mountain is 5,000 meters. The mountain consists of two layers, subtropical small-rocky undulating terrain, which gradually changes, and, on the reach of the summit turns into a cliff of middle-sized detritus. Vegetation is scarce there, but it remains green until late fall and sometimes early winter. The summit is a flat area, and that is where the sacred site is located. Those pilgrims who reach the mountain top can view the whole Toguz-Toro region and all the nine, if not more, mountain ranges. There are also small stone hills erected by pilgrims, which is considered as one of the pilgrimage rituals. By collecting stones and piling them up, pilgrims chant prayers and ask for fulfilment of their wishes. There is a small storage room for dishes and food constructed from stones as well. Small sheets of paper with the names of those who reached the place and made a pilgrimage are also tucked away in the storage room. There are also wooden and iron sticks with tied ribbons – a symbol of ribbon-tying ritual at sacred sites. These ribbons also keep pilgrim’s prayers and wishes. Several years ago, Makmal Gold Mining Company constructed a sign Manas1000. The summit is mostly rocky; however, there are patches of grey-sand mud areas. People recognize these mud patches as “dough clay” and believe them to be burial places. Pilgrims taste the clay and perform certain rituals. On the way up, when the undulating terrain changes into rocky cliff, one can see a small narrow cave. It’s filled with stones of different size and forms. Local people say that it is the place where Aikol Manas is buried. If to stand near the cave, one can hear the murmur of the flowing water.